Rheumatoid arthritis of the intervertebral joints of the cervical spine is characterized by pain, stiffness and the limited mobility of the neck. Rheumatoid arthritis – is one of the most severe joint diseases, occurring with a variety of complications; it mostly affects those who over 30, but can also occur in people of any age. It happens more frequently to women – they suffer from it 5 times more than men. As for the population in general, about 1-2% are affected.

The symptoms of the “classic” rheumatoid arthritis are difficult to confuse with the symptoms of other joint diseases. In the vast majority of cases at the beginning of the disease there is an inflammation and swelling of the metacarpophalangeal joint of the index and middle fingers (it is the joint at the base of the fingers that is in the bones sticking out of the clenched fist). 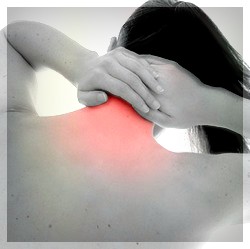 Pain in the joints in rheumatoid arthritis is often amplified in the second half of the night, coming to the morning. Around noon the pain becomes very intense, and patients compare it with a toothache. However, in the afternoon the pain becomes weaker, and at night it is often insignificant. The interesting thing is that in the beginning of the disease, the joint pain is often gets reduced after some active movements or workout, and is not increases from the muscle and joints tension as in the case with osteoarthritis. So, in general, the rheumatoid arthritis neck pain relief (and the same is true for other joints) usually lasts only until the middle of the night, and around 3-4 am the pain attacks in joints return.

Sometimes the patients suffering from inflammatory back pain are treated with a massage, a manual therapy, or warming up, which is a glaring mistake, because all these efforts only aggravate the disease and increase the painful sensation. Such manipulations applied during the active inflammatory process only increase inflammation.

Pain in the lower part of the neck can be observed in polymyalgia rheumatica, although many people mistakenly believe that in this disease the pain is localized only in the shoulders.

The painful neck can be caused by juvenile rheumatoid arthritis, which affects children and adolescents. But in many cases it may occur due to such conditions as cervical lymphadenopathy (a complication of tonsillitis), meningitis, and other serious infections, such as pneumonia (meningismus). It can also be accompanied by polio – a rare disease currently.