Ayurveda experts claim that ginger tea is able to activate “yang” hot energy in the human body. This is confirmed by the fact that the tea provides us with a warming effect while and after drinking it. Considering this, it is a good idea to have a cup of the tea few times a day during winter time, when we tend to experience frequent colds, running nose and the decrease of the body’s defense systems. The benefits of ginger tea come from its useful components present in the tea in abundance: vitamins and amino acids, as well as various trace elements such as calcium, zinc, sodium, phosphorus, zinc, and many others.

Today we can find several ginger tea recipes. A particular recipe will depend on the purpose you want to make the tea for. For example, if you want to save vitality, then one recipe is used; if you simply want to make a pleasant drink – you will use another recipe. If the tea is intended to serve as a remedy, then you will make it differently again.

I would like to point that whatever recipe you use, there are common benefits you get:

Ginger tea also has a powerful antispasmodic action, and according to Ayurveda, it is a wonderful remedy for both respiratory and the circulatory system. It also provides a tonic, antiemetic and expectorant effect. 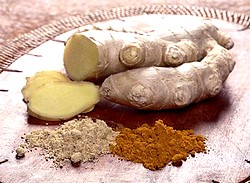 To prepare the drink you will need either fresh ginger or the ground ginger (powdered ginger). Other ingredients will be: honey, black pepper powder, sugar, mint leaves and orange or lemon juice. Please, keep in mind that fresh ginger is much better, more effective and gives you more healthy benefits than the powdered one. Nevertheless, if you cannot get the one, you can still use a ginger tea recipe with ground ginger.

By the way, when you chose fresh ginger root; make sure it is clean, firm and without wrinkles. If you have to use a ginger powder, then take half of the amount of fresh ginger. Also you will need to cook the powder longer, because dry ginger is considered to be more gust.

The Ginger Tea Recipe from Ayurveda 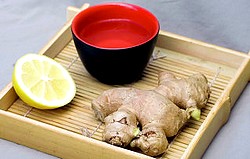 Take a piece of fresh ginger root of a thumb size, peel it thoroughly and wash; after that grate it on a small grater and add a liter of water. Bring the water to a boil and cook ginger for 10 minutes over low heat. Add black pepper during cooking. Once the tea is ready, strain it and add 2 tbsp. of lemon juice and the same amount of sugar. This recipe will be especially effective against cold. It will help you to cheer and warm up, and provides you with energy.

Another option is ginger tea and honey – you can substitute sugar with honey if you like (you will probably have a better effect doing so).

There is a simpler way to prepare ginger tea: bring water to a boil, add grated ginger or a ginger powder to it; immediately after that remove the tea from the heat and let it sit for a while (10-15 minutes).

I want to share my personal experience: despite knowing the fact that ginger is good for digestion, I was neglecting it for that purpose. Once I bought a pack of fresh ginger roots in a supermarket, and after having a dense dinner, I decided to try ginger to get some relief from the sense of heaviness in the stomach. I peeled a small amount of the root (about a phalanx of the little finger), washed it and chewed after the meals. Less than half an hour I did feel relief! I repeated this experiment few times with the same result – great! So in my case it was obvious that there are benefits of ginger for digestion. Now, when it comes to the tea, you should probably drink it before the meals to improve your digestion; drinking it immediately after eating may not be a good idea, since the liquid will diminish the power of digestive fire. You can drink it either sometime after the meals, or do it on a regular basis apart from your meal to improve your digestion in general.

Another point is that the tea from ginger is good for nausea; my sister tried it and she got better. I have no other data to further support this, but you can try yourself.

A friend of mine asked me if it is OK to eat some ginger on empty stomach to make him hungry before the meals. According to my experience (again :)), it can be fine unless you have some stomach problems, I guess. I don’t’ have any, so when I tried to eat a small amount of fresh root on the empty stomach, I felt actually fine; not sure about hunger stimulation, because in my case the latter ceased. 🙂 But again, it may be useful if you are after weight loss. The same will be with the tea, but the effects may be less obvious.

According to 2007 research, ginger, which is rich in gingerol (an active compound), can provide a relief from acid reflux. Ginger is used in a form of decoction to extract valuable components; in other words, you can make a tea from it and use it as a remedy for the condition.

According to University of Maryland Medical Center, “Side effects from ginger are rare, but if taken in high doses the herb may cause mild heartburn, diarrhea, and irritation of the mouth. You may be able to avoid some of the mild stomach side effects, such as belching, heartburn, or stomach upset, by taking ginger supplements in capsules.”

If you take it in a form of a tea, the possible side effects will be significantly reduced; but if you feel that something goes wrong, consult with a specialist.

Foods That Cause Flatulence
Examples of Carob Powder Recipes
Best Foods to Remove Toxins from Your Body
Posted in NutritionSeptember 29, 2012November 22, 2017 Damodar