Padmasana (from Sanskrit: “padma” – Lotus, and “asana” – posture, pose, seat) – the well-known lotus position, the classics of the genre, so to speak. That’s how most people imagine yoga – a thin ascetic, sitting still in the lotus pose with a straight face expressing something like, “I know everything and I don’t care about anything.”

Yoga is pretty well known, and you have probably heard about it either. The lotus pose is a sort of a symbol of yoga, since there are lots of pictures with people sitting in padmasana and meditating.

The pose doesn’t look very difficult nevertheless the mastering of padmasana takes time and effort. But the main subject of this post is the benefits of the lotus pose.

Padmasana and Its Benefits

From the physical point of view, the lotus pose improves circulation of pelvic organs and tones back muscles. But the main benefits come from the more subtle things. 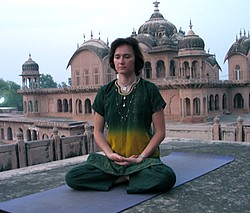 Lotus pose creates conditions to lift apana-vayu – one of the five main air streams in our body. Apana-vayu is also called the “Energy of Death”, because it flows down and sooner or later will drain the body and thus brings death. It is responsible for the excretory and reproductive functions. Its excessive leakage leads to lewdness and thus reduces the level of intelligence; in extreme cases – to depression, apathy, and other severe mental states (they are all associated with excessive loss of energy through the channels that lead into the infernal worlds).

One of the goals in yoga is to lift apana-vayu up, and it is believed that a saint person has its apana-vayu flowing upwards (to the heavenly worlds). This also slows down the aging process, and makes a person enlightened.

Regular practice of padmasana activates sushumna nadi or the central energy channel, which is usually idle in a common human being. This elevates a person to the state of the mode of goodness (sattva guna), which further purifies their body, mind and intelligence.

Through sushumna nadi Kundalini flows. And since sushumna gets activated, Kundalini may awake, unfolding the whole potential of the human being.

So the full lotus pose benefits are manly those that help transform the person into a higher being by uncovering the persons potential, and unfolding their internal energy, and directing it upwards.

2 thoughts on “The Lotus Pose Benefits”